Wreck more than 400 years old under the city

SWEDEN The old ship was likely a 30-meter long Samson cargo ship, abandoned in the early 17th century and buried under garbage. 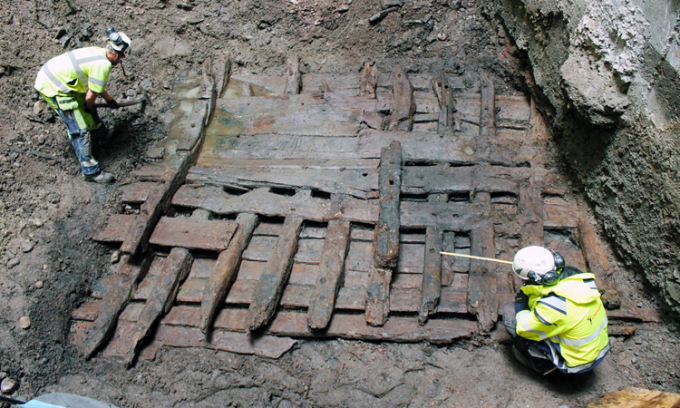 The 400-year-old wreck is suspected to be the Samson cargo ship. Photo: Fox News.

Experts at the archaeological company Arkeologikonsult announced the wreck discovered in Kundstradgarden, Stockholm, last summer. The results of the wood analysis show that the ship was built in the 1590s. It used to operate on Stockholm's old waterways. These roads were later filled to serve the expansion of the city.

"The ship was left ashore in the early 17th century, then buried under the rubbish of the area's inhabitants. We found everything from coins, water pipes to pottery and glass, even a a small ball of clay. Maybe a child dropped it while playing on the train, "explains archaeologist Philip Tonemar.

Specialists from Vrak Vessel Museum assist in identifying wrecks. This is most likely the Samson freighter commanded by Duke Karl in 1598. The ship disappeared from records from 1607.

Late last year, two large 17th-century warships were also discovered off the coast of Vaxholm, Sweden. One of them could be the Applet, the "sister" of Vasa, the famous warship wrecked on her first sailing. In 2014, researchers began exploring the Swedish wreck of Mars. This ship sank in the Baltic Sea in the battle of 1564.