What does the second solar system in the universe, the Kepler 90 galaxy, look like, and are there aliens there? 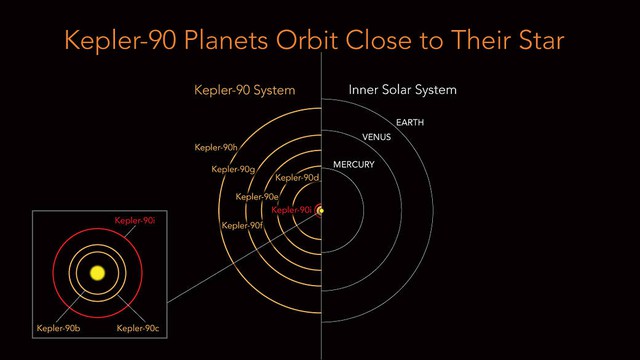 Kepler 90 is actually the 90th star discovered by the Kepler space telescope. This star, located in the direction of the constellation Draco, has about 1.13 times the mass of the sun. It is a yellow dwarf star like the sun and its surface temperature is slightly higher than that of the sun, about 5930K. So its luminosity is also slightly higher than that of the sun (its absolute magnitude is about 4.54, slightly brighter than the sun's 4.83) but because this star system is 2,545 light-years so the apparent magnitude is only 14, so we can't see it with the naked eye. 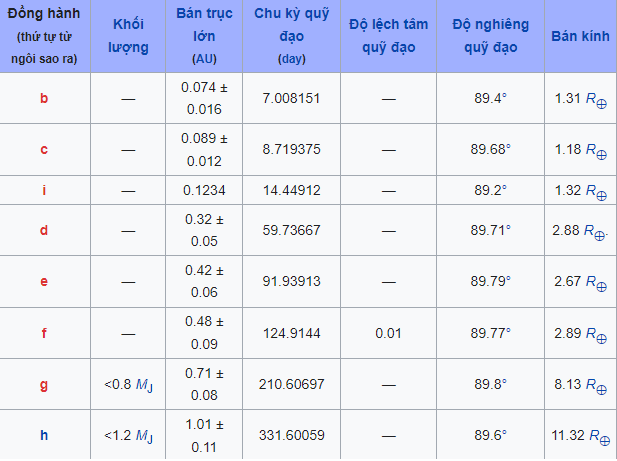 Kepler 90 is a G-type mainsequence star located approximately 2,545 light-years (780 pc) from Earth in the constellation Celestial Dragon. This star is notable because it has a planetary system with the same number of observable planets as the solar system.

Situation of the eight planets

According to the nomenclature of the planets, the initial sequences of numbers b, c, d, e, f, g, h, i, and i must be behind, i.e. the furthest. But since this star "i" was discovered last, while the other seven planets have been discovered and named long ago, so alphabetically it should come last, but according to actual position. reality is not so. In addition, we have been familiar with and used the names of the previous 7 planets in many sources over the years, so we do not want to change the names of the remaining planets just because a new planet has been discovered. 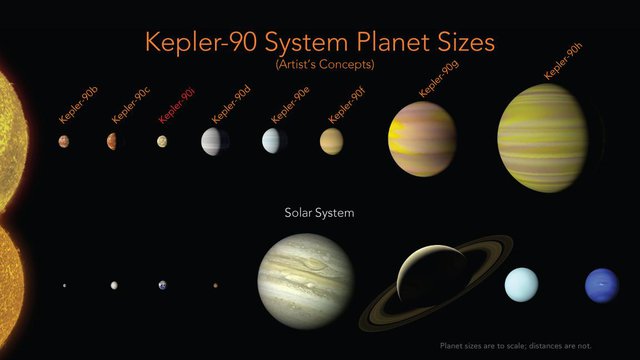 The Kepler space telescope is a telescope launched by NASA in 2009 to search for exoplanets based on changes in star brightness. Therefore, this method can only find traces of planets and know roughly the masses of these planets.

The data obtained shows that all 8 planets of Kepler 90 are larger than Earth. The planet with the largest volume is Kepler 90h with a radius 11.32 times that of Earth, similar to Jupiter, but slightly larger; The least massive planet is Kepler-90c, with a radius about 1.2 Earths. 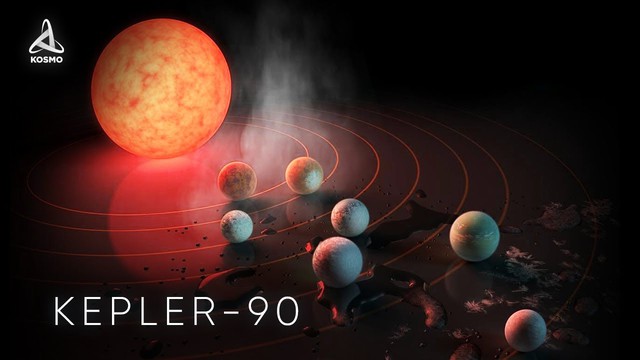 There are other methods of observing exoplanets, such as the gravitational perturbation method, which estimates a planet's mass by observing the influence of gravity on the planet's motion. star. Using this method, scientists initially learned that the masses of the three planets i, g and h in the Kepler-90 system are about 2.5 times that of Earth, 0.8 times of Jupiter and 1, respectively. ,2 times Jupiter.

What's the most Earth-like planet, what Kepler 90i looks like

In fact, since 2009, NASA has been paying attention to the planet Kepler 90. The Kepler telescope uses a photometer to observe whether the star is having a transit event with a decrease in luminosity. . And since the discovery of the first planet in 2013, the remaining planets have been discovered one after another, initially seven planets orbiting Kepler 90, and not until 2017, this Kepler 90i was discovered. presently.

The discovery was made by "picking up leaks", that is, by looking at past data from the Kepler telescope. According to NASA, the discovery also benefits from the application of new computer algorithms that, quite frankly, use AI (artificial intelligence). Kepler 90i was found by Google engineer Christopher Sharu and University of Austin astronomer Andrew Vanderbilt via AI, after a previous weak signal was missed. 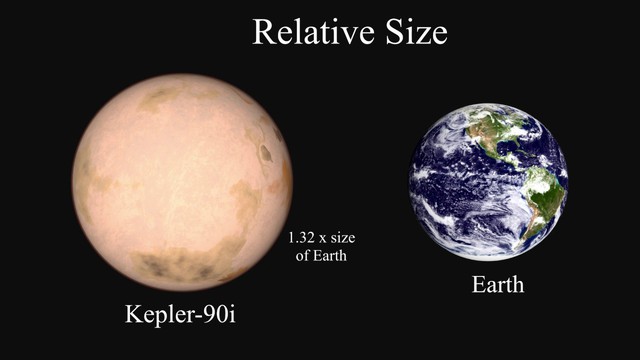 The study shows that the planet is third in the Kepler 90 star system, is identical to our earth in the solar system, and is a rocky planet like Earth, with a radius 1.32 times that of Earth and about 2.5 times the mass of Earth. So, is there life or civilization on it?

Research shows that this possibility is very small, because the planet is so close to its host star, only about 0.1234AU (astronomical unit, 1AU is about 150 million km), and its rotation period is only 14, 45 Earth days, while the Earth's rotation around the sun is 365 days. 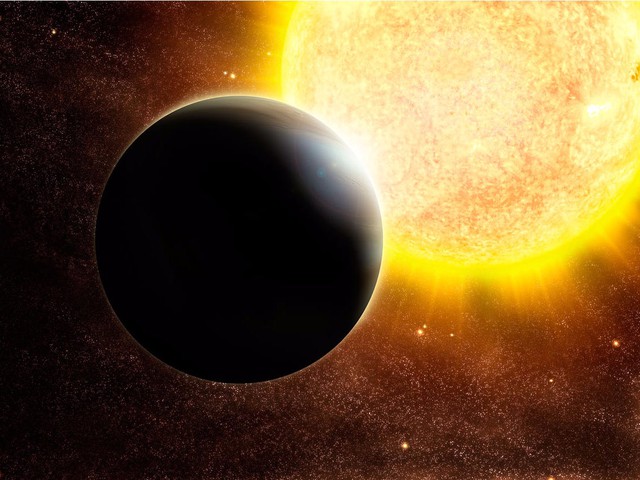 Due to being so close to the host star, even if Kepler-90i has an atmosphere, it will evaporate and be blown away by the stellar wind, making it unlikely that Kepler 90i has an atmosphere. The rotation of the planet can also be locked by the gravity of the host star, similar to our moon. This means that the side facing the host star will be permanently burned by the heat wave, while the other side will be as cold as an ice cave, with temperatures below minus 100 degrees Celsius.

In such a state, liquid water is very unlikely to exist, so it is unlikely that Earth-like life could form and exist there. However, some argue that on such planets there are still habitable zones, possibly liquid water and suitable conditions for life.

Now that the Kepler space telescope has been retired, many space telescopes have inherited its unfinished work. Recently, NASA launched the Webb space telescope - the most expensive and most advanced telescope in history. This telescope, which cost US$10 billion to develop and launch, is several times more powerful than the Hubble Space Telescope.