THE US Stratolaunch successfully tested for the first time carrying a prototype of the Talon supersonic vehicle with the world's largest aircraft on October 28. 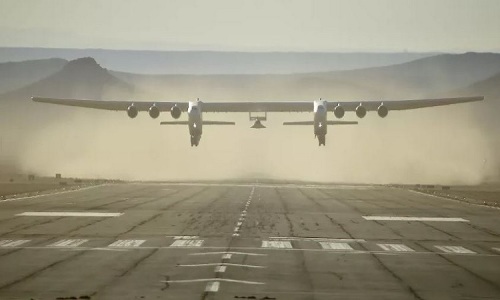 The giant Roc transport plane with a wingspan longer than a football field takes the Talon-A (TA-0) prototype into the sky above the Mojave Desert in California. The flight was intended to demonstrate that the Roc can carry a hypersonic vehicle designed for mid-air launch.

"This is the first integrated flight test of the Talon launch system," said Brandon Wood, Stratolaunch's vice president of programs and operations. "We will promote more complex and high-performance flights for the hypersonic test environment."

Stratolaunch's Roc aircraft took off from the Mojave Air and Space Port, carrying the 8.5-meter Talon test vehicle attached to a pillar in the center of the 117-meter wing. The flight lasted more than 5 hours and reached a maximum altitude of 7,000 m. The company says the test met all of its goals.

The company Stratolaunch was founded in 2011 by Microsoft co-founder Paul Allen to launch rockets into space from the atmosphere. Allen died in 2018, just six months before Roc's first test flight in April 2019. The company is developing a series of Talon vehicles for testing supersonic flight at speeds up to Mach 6 (7,408 km/h). The October 28 flight with TA-0 marked the 8th flight of the Roc aircraft.

If the December drop test is successful, Stratolaunch is expected to test-fly the first complete supersonic vehicle, the Talon-A TA-1, in 2023. The company is also building two more versions TA-2 and TA -3 is fully reusable. Stratolaunch plans to offer supersonic flight services to government and commercial customers by 2023.