International astronomers first measure the wind speed in the atmosphere of an object outside the solar system.

In 1996, hurricane Olivia swept across Australia, jerking at 408 km / h, setting a record for the fastest wind speed on Earth. But this number is still far below what was recorded on a brown dwarf called 2MASS J1047 + 21 in the constellation of the Lion, with an average wind of 2,400 km / h, according to research published on September 9. / 4 in Science.

The team at the Harvard-Smithsonian Center for Astrophysics (CfA) has developed a new technique based on the radio observations from and the VLA Observatory of the US National Science Foundation and Spitzer Space Telescope. by NASA, which allows to measure wind power on distant objects.

To measure wind speed on Earth, scientists can rely on the rotation speed of a continent and the speed of a cloud when viewed from outer space. The difference between these two values ​​is due to the fact that the wind pushes the clouds away relative to the surface.

However, for objects outside the Solar System such as 2MASS J1047 + 21, astronomers are unable to see clouds clearly in their atmosphere. Instead, they track cloud movement in a different way. As a cloud moves, it changes the brightness of an object when viewed from Earth. Based on that, the team used periodic changes in the brightness of the brown dwarf to determine its wind speed. 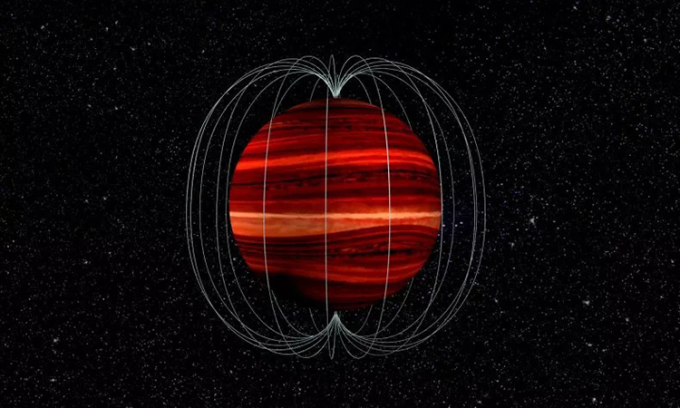 "Brown dwarfs also have an atmosphere but are very different from Earth. They can be completely covered in clouds made of many different chemical compounds. 2MASS J1047 + 21 is too far away to we can see each cloud individually, but we can still measure how long a group of clouds takes to circle an entire atmosphere.This time depends on two factors: the speed of rotation around the axis of the brown dwarf and its atmospheric wind speed, "explained Peter Williams from CfA, a team member.

Although there are many similarities with Jupiter, 2MASS J1047 + 21 has a much higher wind speed, about 6.5 times. Studying the wind speed on celestial bodies outside the solar system is important because it provides information about the atmosphere, one of the determinants of the ability to support extraterrestrial life.

2MASS J1047 + 21, 33 light-years from Earth, is about the size of Jupiter but 40 times heavier. Brown dwarfs are sometimes referred to as "failed stars," because they are too heavy to be considered a planet but not large enough to produce thermonuclear reactions in the core like a true star.