The concept of a giant yacht like a city holds 60,000 people

The Italian company revealed the idea of ​​​​designing a 550-meter-long yacht, estimated to take 8 years to build with 8 billion USD if it is to be realized. 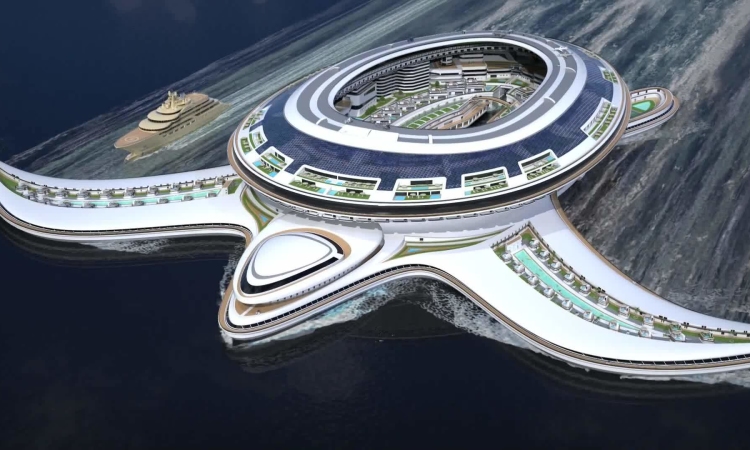 Italian design firm Lazzarini introduced the concept of a giant superyacht Pangeos like a floating floating city, Design Boom reported on 11/11. The yacht has many hotels, shopping malls, parks, piers, airports and other necessary infrastructure for the 60,000 passengers living in the sea.

Pangeos is named after Pangea, the supercontinent that existed millions of years ago, during the late Paleozoic and early Mesozoic. The yacht is 550 m long, up to 610 m wide at the widest part (wings). If realized, this turtle-shaped vehicle could become the world's largest structure ever built.

With a draft of 30 m, Pangeos' huge body splits into several blocks. The superyacht has harbour, main square, villas, private houses, buildings, terraces. The large upper yard allows many aircraft to land. In the space below, the design team equipped the yacht with 30,000 rooms and provided an anti-sink solution for the bottom of the boat, which is expected to be mainly made of steel. Pangeos also comes with a dockyard 600 m long, 650 m wide, with direct access to the sea.

Pangeos is equipped with 9 HTS engines, each electric motor has a capacity of 16,800 horsepower. This giant vehicle can run on water at a speed of more than 9 km / h. While moving, the large wings will receive energy from the waves and Pangeos can run across the oceans without emissions. In addition, the roof is also covered with solar panels, providing part of the clean energy needed for the superyacht.

Lazzarini hopes Pangeos won't be an idea in the future. To build this superyacht, experts estimate it takes about 8 years with a cost of 8 billion USD.