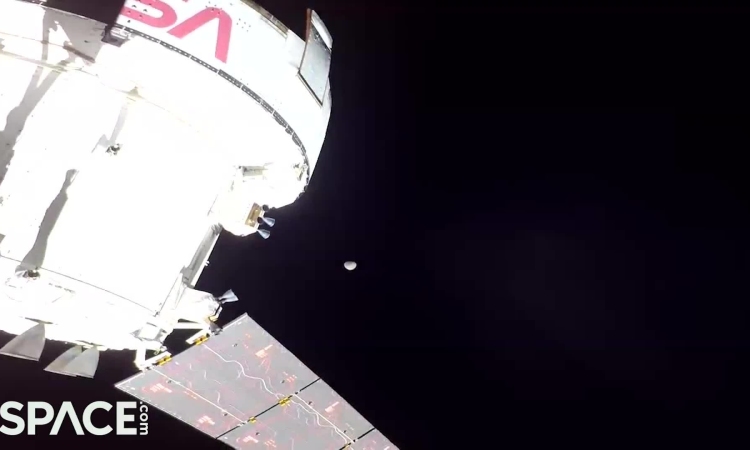 In the video released on November 18, the semi-bright Moon can be seen in the distance, behind the Orion spacecraft with the NASA logo partially obscured by darkness, when viewed from the camera mounted on the head of one of the spacecraft. solar arrays. By that time, the spacecraft was halfway to lunar orbit.

"On day three of the Artemis I mission, Orion maneuvered its solar arrays and photographed the Moon with a camera mounted at the top of the array," NASA wrote in the video description.

The US Space Agency launched Orion on November 16 with a Space Launch System (SLS) rocket, currently the most powerful rocket in the world. The spacecraft is scheduled to make a 25-day journey to lunar orbit and back to Earth on December 11. NASA deployed this unmanned mission as a test flight for its Artemis program to see if the SLS rocket and Orion spacecraft would be ready to land astronauts on the Moon by 2025.

To document this historic test flight, Orion was equipped with up to 24 cameras scattered across the exterior and interior of the ship, as well as on solar panels.

On November 17, NASA also shared a selfie photo of the Orion spacecraft with Earth at a distance of 92,000 km, about a fifth of the distance between the Earth and the Moon, at a speed of nearly 8,800 km / h.

As of November 19, the Orion spacecraft is 348,247 km from Earth, 149,746 km from the Moon and flies through space at a speed of 1,601 km/h. So far, the flight has gone relatively smoothly and exceeded the expectations of NASA mission managers, although there were minor hiccups as they figured out how the spacecraft would work in deep space.