The Canadian startup is developing a portable solar power station that can charge robots that go into a permanently dark crater on the Moon. 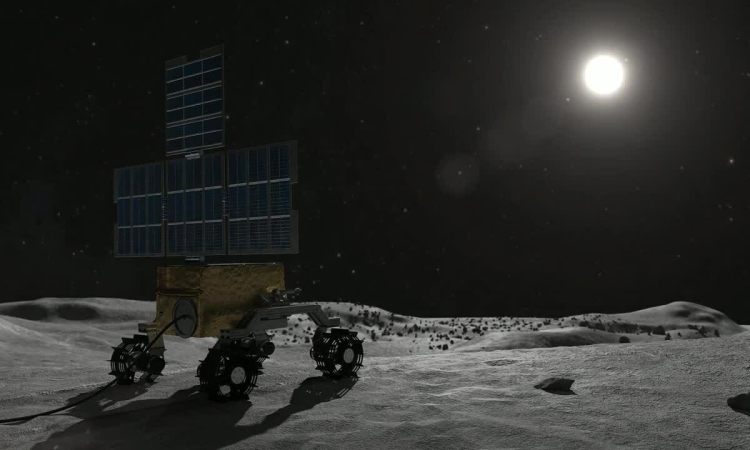 The always-dark craters around the Moon's south pole are of particular interest to scientists because their pristine interior may hold traces of the solar system's past. But since sunlight never reaches the inside of those craters, any rovers that come here will have to rely on the limited power of the integrator's batteries.

To provide a more stable source of power for future lunar rovers, Canadian startup Stells Space plans to land a "self-propelled power station" on the Moon in 2025 to transfer energy to the crater, allowing the robots to recharge, Space reported on November 21.

The power station is called Mobile Power Rover 1 (MPR-1). It works by placing a "charging block" inside the crater, then standing on the edge of the crater and spreading its photovoltaic panels under the Sun. It will transfer the generated power through the cable to the charging block. There, the explorer robots can wirelessly connect to the charging block and get the amount of electricity they need.

"MPR-1 will charge lunar rovers that have installed our own or third-party ultra-light wireless receivers. The project aims to take lunar exploration a big step forward, towards the ultimate goal is a long-term human presence on this celestial body," said Stells Space.

The self-propelled power station MPR-1 weighs 30 kg, is expected to land on the lunar surface thanks to Intuitive Machines' Nova-C lander in 2025. Stells Space added, wireless charging technology will work well. in a vacuum environment. To increase the reliability of the technology, the company uses parts developed for Mars rovers, geostationary satellites and deep space probes.

Other space agencies and private companies are also developing technology to help establish permanent infrastructure on and around the Moon, enabling humans and robots to operate. For example, in 2020, NASA signed a contract with Finnish telecommunications company Nokia to establish LTE/4G communications on the Moon. Meanwhile, the European Space Agency (ESA) is developing a satellite navigation system for the Moon, which will help extend the reach of GPS satellites to this celestial body.