A rare diamond found in Botswana provides evidence that water can penetrate deeper into the Earth's interior than scientists had anticipated. 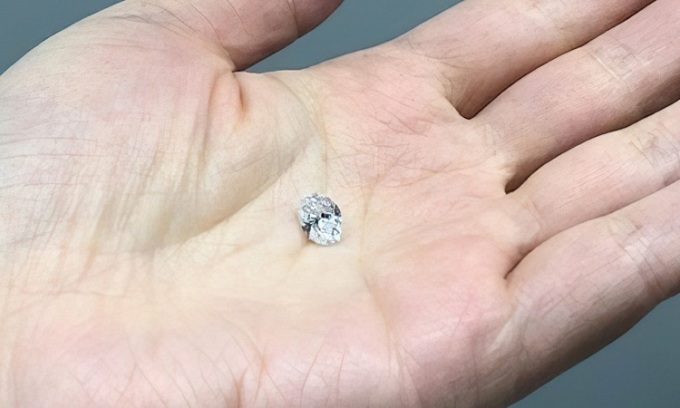 The inclusions in the 1.5 carat diamond contain evidence of minerals forming in the lower mantle. Photo: Tingting Gu

More than 70% of the Earth is covered by water, in addition, water exists in minerals more than 322 km underground, including the upper mantle. Scientists have long thought that as the upper mantle gradually turns into a hotter and denser mantle, minerals can hold much less water. But in a new paper published on September 26 in the journal Nature Geoscience , the researchers found a diamond with tiny bits of water-rich minerals (called inclusions) that appear to exist at the boundary of a diamond. between the top and bottom coatings. Research results show that there is water at a greater depth in the ground. This could affect our understanding of the water cycle and plate tectonics. 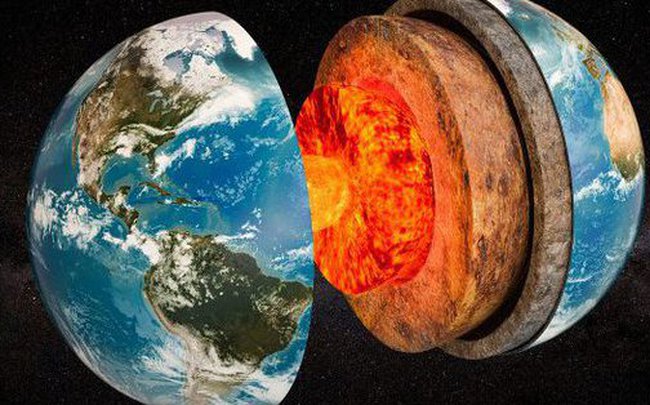 Lead researcher Tingting Gu, a mineral physicist at Purdue University in Indiana, and colleagues examine IaB diamonds, a rare type of diamond from the Karowe mine in Botswana, that formed deep underground over time. long. To study diamonds, they use non-invasive forms of analysis, such as Raman microspectroscopy and X-ray diffraction, to look at the diamond's internal structure without cutting it out.

Inside the diamond's inclusions, the team found a mineral called ringwoodite, which has a chemical composition similar to olivine, the base material in the upper mantle but forms under extreme conditions of temperature and pressure. . Ringwoodite usually exists in the transition zone between the upper and lower mantle, at depths 410 - 660 km below the Earth's surface, possibly containing more water than the minerals bridgmanite and ferropericlase that are common in the lower mantle. 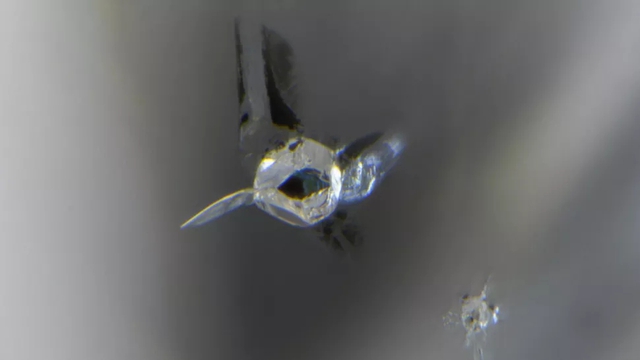 But instead of minerals commonly found in the transition zone, ringwoodite is surrounded by typical mineral forms in the lower mantle. Because the diamond's outer covering preserves the properties of the minerals when they were born deep in the earth, the team was able to work out the temperature and pressure they experienced. They estimated the depth of the mineral at about 660 kilometers below the surface, near the outer boundary of the transition zone. Further analysis revealed that ringwoodite may be in the process of dissociating into lower mantle minerals in a water-saturated environment, indicating that water can penetrate from the transition zone to the lower mantle.

While previous research has found some form of minerals from the lower mantle in diamond inclusions, the inclusion of matter in the inclusions in the new study is unique. The results of the study have many implications for understanding the water cycle between the surface and deep layers of the planet. The new discovery may also affect tectonic plate patterns. Gu hopes scientists will integrate the findings into models of the impact of mantle water on processes such as convection currents within the Earth. This current powers plate tectonics through uneven heating of the mantle, causing the hotter part to rise and shift Earth's plates over millions of years.

Is there a secret deep underground that science has not been able to grasp?

Due to the limitations of technology-engineering, humans have not been able to fully understand the world deep below the surface of our planet.

Scientists have long thought that as the upper mantle shifts to the hotter, denser lower mantle, minerals can hold much less water.

However, the discovery of 'messengers' located at a depth of hundreds of kilometers of the Earth, partly helps scientists get a rare view of this mysterious world.

That 'messenger' is a diamond that has just been found at a depth of 660 km.

Specifically, a diamond recently unearthed at a Karowe diamond mine in Botswana (southern African country) has numerous cavities containing traces of ringwoodite, ferropericlase, enstatite, and other minerals that suggest diamond formed 660 km above the Earth's surface.

THE SECRET OF THE DIAMOND AT 660 KM DEPARTMENT

What is more special, according to a team of researchers led by mineral physicist Tingting Gu of the Gemological Institute of New York (USA), the environment in which this diamond formed - the division between the upper mantle and below is called the 660 km discontinuity (or more simply, the transition zone) - VERY WATER RICH.

"The presence of ringwoodite together with the hydrated phases indicates that the environment is very humid at this boundary. This is an amazing finding," the team of scientists wrote in the journal Nature Geoscience.

The results suggest that there may be water deeper inside the Earth than scientists thought, which could affect our understanding of the deep water cycle and plate tectonics on the planet.

Scientists analyze: Most of the Earth's surface is covered by oceans. However, considering the thousands of kilometers between the planet's surface and core, they are mostly just a small puddle. Even at the deepest point, the ocean is only 11 kilometers thick.

But the Earth's crust is a cracked and fragmented thing, with separate tectonic plates grinding against each other and sliding under each other's edges. At these subduction zones, water seeps deeper into the planet, all the way to the lower mantle.

Over time, it returned to the surface through volcanic activity. This downflow, outflow cycle is known as the deep water cycle, which is separate from the surface active water cycle.

Understanding how it works and how much water is down there is also important for understanding our planet's geological activity. For example, the presence of water can influence the explosiveness of a volcanic eruption, and play a role in seismic activity.

However, since we can't go down there, we have to wait for proof of the water reaching us, like it is in the form of diamonds that form under extreme heat and pressure.

Mineral physicist Tingting Gu and her colleagues recently studied such a gem in detail, finding 12 mineral deposits and a cluster of milky inclusions.

To study the diamond, they used "non-destructive" forms of analysis, including Raman microscopic spectroscopy; use a laser to non-invasively reveal certain physical properties of a material; and X-ray diffraction to look at the diamond's internal structure, probing these impurities to determine their nature without cutting it out.

Ringwoodite has a similar chemical composition to olivine, the main material of the upper mantle, but forms under such intense heat and pressure that, until 2008, scientists had only found it in a meteorite sample. .

Ringwoodite is commonly found in the transition zone between the upper and lower mantle, between 410 and 660 km below the Earth's surface, and can contain much more water than the minerals Bridgmanite and ferropericlase.

At high pressure at the transition zone, ringwoodite decomposes to ferropericlase, as well as another mineral called Bridgmanite. At lower pressures closer to the surface, Bridgmanite becomes enstatite. Their presence in the diamond tells the story of a journey, showing that the stone was formed at a depth before returning to the crust. 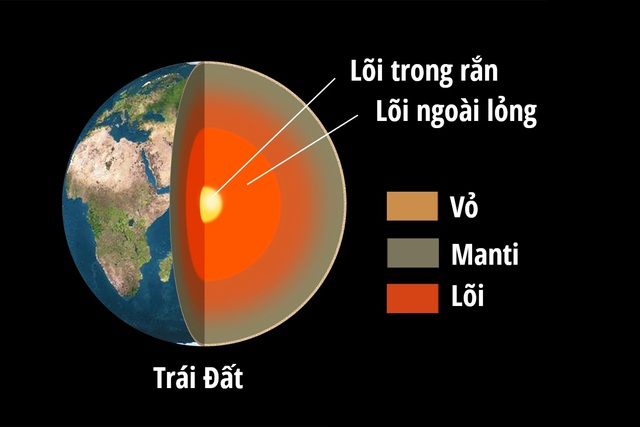 Ringwoodite in particular has characteristics that suggest it is hydrated in nature - a mineral that forms in the presence of water. Meanwhile, other minerals found in diamonds, such as brucite, are also hydrophilic. These clues suggest that the environment in which the diamond forms is rather humid.

Evidence of water in the transition area has been found before, but that evidence is not sufficient to assess the amount of water there.

"Although the formation of mantle diamonds is often associated with the presence of liquid, ultra-deep diamonds with similar cavitation mineral assemblages," the team of scientists write in the paper. is rarely observed in association with hydrated minerals".

This finding could also affect plate tectonics models. Tingting Gu said she hopes scientists will be able to incorporate the findings of this study into models of how water in the mantle could influence processes such as convection currents within the Earth's interior. This in turn promotes plate tectonics by heating the Earth's mantle unevenly, causing hotter parts to rise and shifting the Earth's plates over millions of years.

The study was published September 26, 2022 in the journal Nature Geoscience.