Photovoltaic battery island can rotate in the direction of the Sun

The Portuguese company's photovoltaic island has a modular form, which can be easily disassembled or assembled into a large-scale floating solar farm. 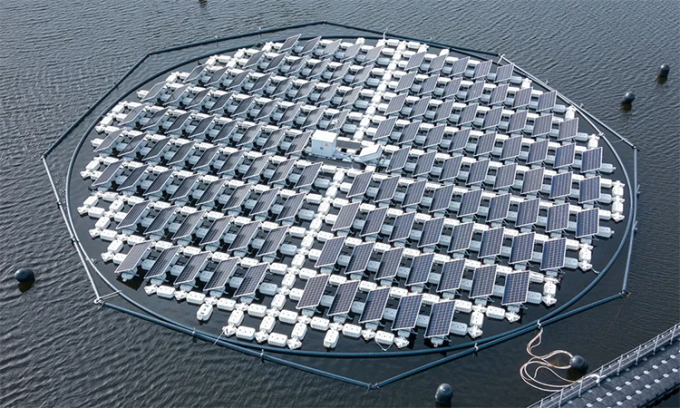 Portuguese company SolarisFloat has developed an innovative floating photovoltaic system with the ability to rotate in the direction of the Sun, Interesting Engineering reported on November 21. The floating island is powered by electric motors that consume less than 0.5% of the total energy generated. This is the first system to combine floating solar cells with Sun tracking technology.

The island, called Protevs, is now located in Lake Oostvoorne Meer, southwestern Netherlands. Made up of 180 portable solar panels, the building has a total installed capacity of 73 kWp (maximum capacity) and helps to increase electricity production by up to 40% thanks to sophisticated technology that allows the solar panels to The two-sided sun rotates in the direction the Sun moves.

SolarisFloat offers two types of systems. The first is the Protevs+ which has 180 modules with dual-axis tracking, like the one in Oostvoorne Meer. The island has a diameter of 38 m with an area of ​​1,444 m2. The panels move vertically. The second type is Protevs Single360, operating on a single axis, with 360 modules. This type has an installed capacity of 147 kWp with 410 W panels.

SolarisFloat systems are modular, removable and expandable with a simple installation process. The islands can merge to form a larger floating solar farm.

Protevs offers many environmental benefits when in operation. The shade created by the floating structure helps reduce surface temperatures, which is beneficial to aquatic ecosystems. SolarisFloat says the system reduces water evaporation by 60%. In addition, water quality is likely to increase due to reduced algae and other microbial reproduction thanks to the aforementioned shade effect. This will be further enhanced if a device that adds oxygen to the water is installed.