Not everyone knows about airplane tires 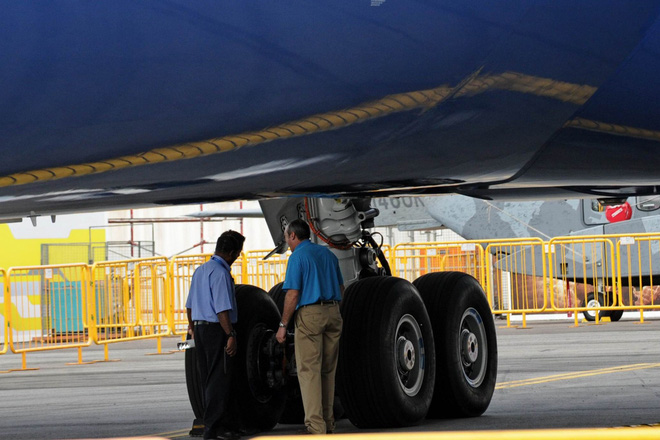 The tire condition and pressure must be carefully checked prior to each takeoff by maintenance staff and one of the pilots.

At first glance, airplane tires seem small compared to the total size of an airplane. In fact, however, aircraft tires are much larger compared to conventional car tires. For example, the tires of a Boeing 737 are up to 27 / 7.75-R15 in inches, meaning that they are 685.8 mm in diameter, 196.85 mm wide, and 381 mm in rims.

Are airplane tires made of the same material as car tires?

Construction of aircraft tires of the company Michelin.

The chemical composition is similar. The complete aircraft tire is made up of four basic materials: rubber, nylon, some special wire and steel. The rubber here is usually natural rubber, because it has better specifications, such as its ability to dissipate heat. However in terms of structure, it is formed by a process called vulcanization, with many layers of overlap such as nylon, Kevlar ... Technical standards for hardness, durability, abrasion ... is also stricter than conventional tire manufacturing standards, even compared to supercars or sports racing tires.

What is air pumped inside the tire? 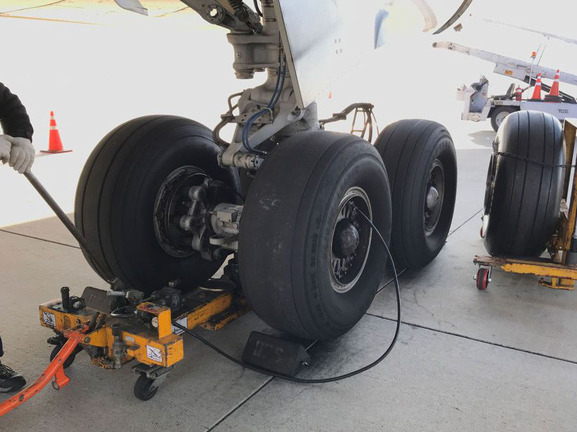 The gas injected into the tire will be an inert gas such as nitrogen, to minimize the increase or decrease in tire pressure caused by temperature. Because if it contains a lot of air, the steam combined with the high temperature and pressure upon landing will cause it to automatically explode when it reaches the limit point. And the other thing is that the inert gas also prevents corrosion on the inside of the rim.

What is the pressure when pumping an airplane tire?

PSI is Poundper Square Inch - means the Pound pressure applied per Square Inch. And according to reports, aircraft tires are pumped to about 200 psi, six times the psi of the average car tire. In fact, according to an experiment recorded by National Geographic, the tire of a Boeing 737 can withstand more than 900 psi of pressure before it explodes.

Why is the groove on the tire of an aircraft straight? 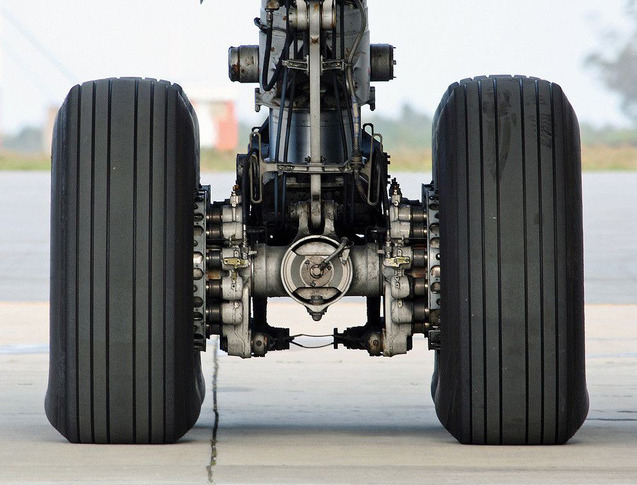 This design is designed to prevent Hydroplaning or Aquaplaning situations, which occur while tires are moving on slippery pavement when it rains. These longitudinal grooves also provide better grip between the runway surface and the aircraft tire, helping stabilize the direction and aid braking. If you use the shapes commonly found on car tires, they will simply break under pressure at landing.

And all aircraft tires do not need some diagonal groove or any other shape to activate or assist in the change of direction when traveling as on other vehicles.

Why don't aircraft tires explode when they land because of the weight and speed they suffer?

First, the pressure on an airplane tire is very high. Second, each tire has an average load capacity of up to 38 tons and each aircraft will have 14, 22 or 32 tires depending on the size and type so the load capacity will be shared among many tires. Third, the tire is made of super durable materials, with a special patterned system. These three help them to bear good loads and operate persistently. 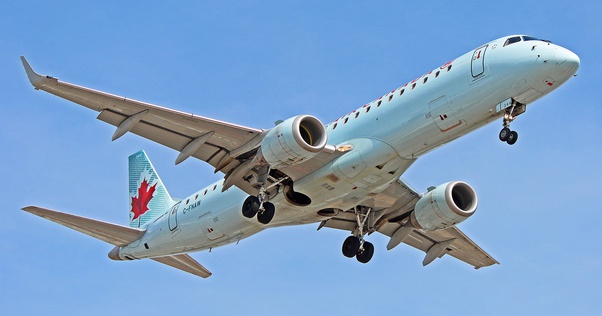 Tire number of the Embraer 190 jet. 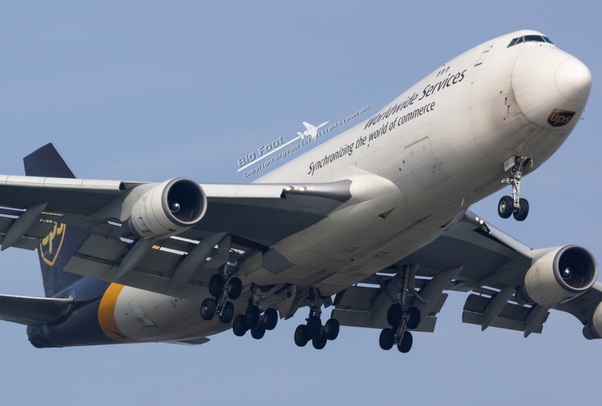 Will airplane tires slip or roll as soon as they land?

As soon as the plane lands, at the first moment, the tires will slide instead of rolling. The plane will drag them along the runway until the tire's rotation speed matches the speed of the aircraft. This is the reason why airplane tires often smoke every time they land and this also wears out a portion of its rubber on the tarmac. To do this, the modern anti-lock brakes specially designed for aircraft squeeze and release the brakes hundreds of times per second, reducing landing distance to the lowest level.

Does rubber come out from the tires on the runway? 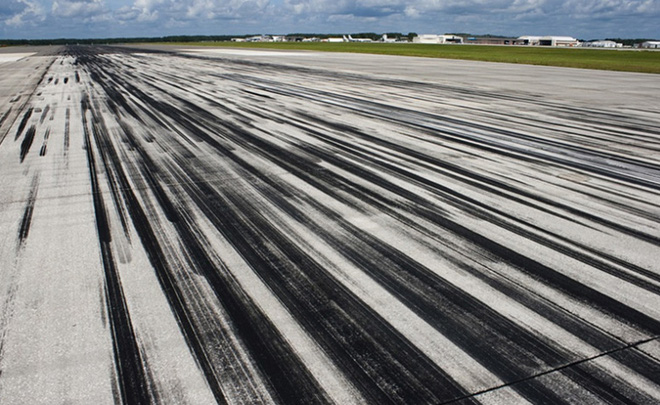 Most common tire wear and tear comes from landing. The rubber on the tire will partially ignite until the tire rotates at the right speed of the plane's cruising speed. This causes heavy smoke and wears off part of its rubber, leaving it on the runway. Airports often use high-pressure water or chemicals to remove this rubber.

How often to change aircraft tires? 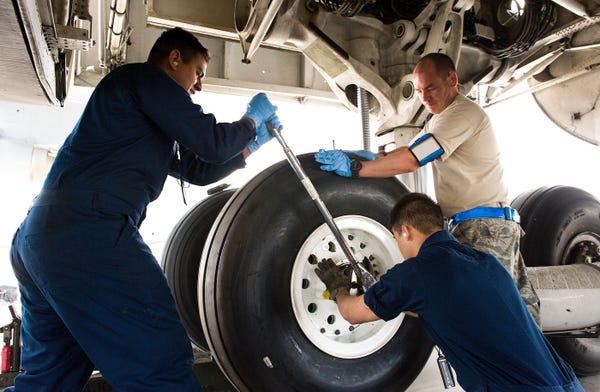 After each landing, all aircraft tires will be checked for wear.

An average airplane tire can make about 450-500 landings before needing to rework the grooves. A tire can be reworked 7 times during its lifetime. Tire replacement can take anywhere from 40 minutes to two hours.

In practice, however, each tire manufacturer has specific wear and tear criteria to determine when aircraft needs to be replaced. Occasionally, unusual problems appear on the tire body such as cracks, breakage, special wear ... and they can be replaced immediately.

Even when not in use, the aircraft still needs periodic tire changes. In addition, outside temperatures also affect the life of the tires, for example, planes often fly over the sea, or land at high-temperature airports near the desert, with runways often having sandy. 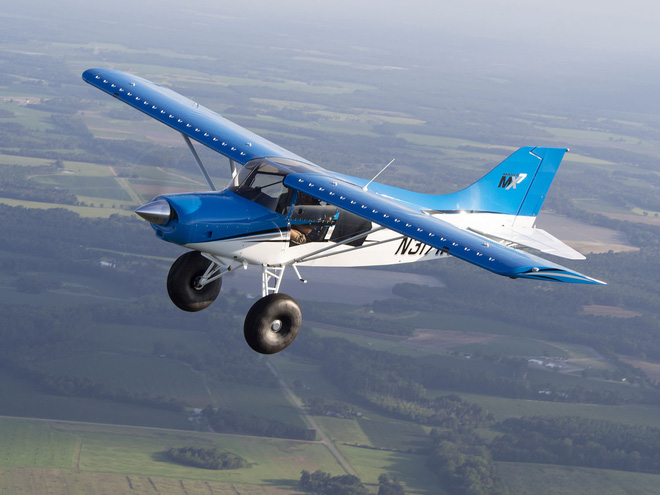 Depending on the aircraft type, manufacturer and other criteria, the price difference between a few tens of dollars, a few hundred dollars to a few thousand dollars each.

So if you want to know the detailed price of a tire in a specific position on the fuselage, you need to get the serial number on the tire and ask the airline's purchasing department. Prices will also change if you or the airlines have a long term contract with the tire manufacturing company.

Do airlines have tires in stock? 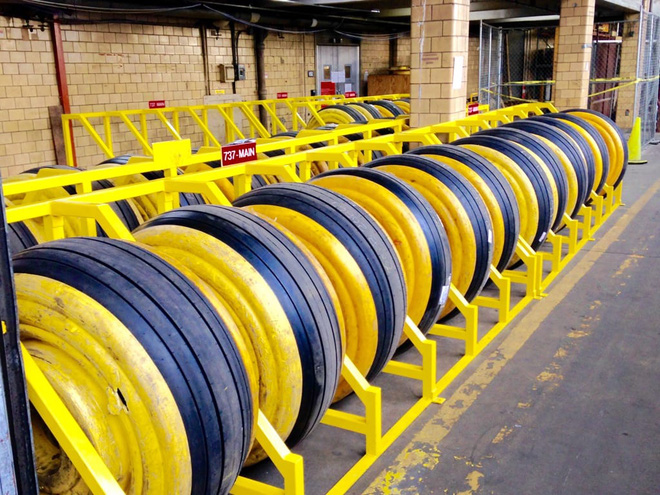 Yes of course. Aircraft tire storage rack looks like the picture above And not just tires, an airline stores many aircraft parts, and they are tightly controlled by a separate department. They are responsible for purchasing, lending, repairing, exchanging components ... for their own company or even another company if required to cooperate.