NASA spacecraft records Earth from a distance of 373,000 km

NASA has shared a new video of the Orion spacecraft orbiting the Earth behind the Moon while flying close to the surface of this satellite. 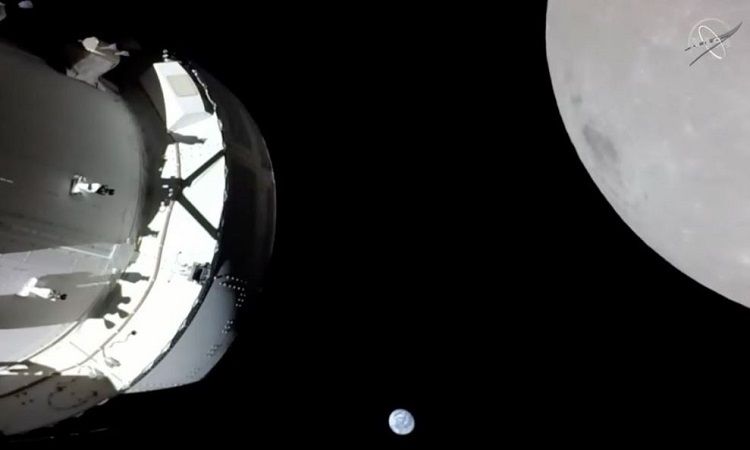 Artemis 1, the first flight in NASA's Artemis program, launched on November 16. After taking off on a Space Launch System rocket, the Orion unmanned spacecraft completed every major milestone, including an engine burn to enter lunar orbit on November 21. NASA shared a video recording the moment Orion captured the Earth while flying near the Moon. At the time, the spacecraft was flying 373,000 kilometers from the planet, according to NASA spokeswoman Sandra Jones.

The Orion's high-definition image goes beyond previous Earth photos, reminiscent of the Apollo 8 flight on December 24, 1968, when astronaut Bill Anders photographed the Earth rising behind the Moon. . Similarly, NASA's Voyager 1 spacecraft has also photographed "blue dots" from above the plane of the solar system and beyond the orbit of Neptune. In recent years, Earth observation satellites such as Suomi NPP and GOES-16 have both taken pictures of the planet from a distance.

On December 1, Orion's service module will burn to leave the DRO, bringing the spacecraft close to the Moon four days later. Next, the service module will perform a final burn for the Orion to enter the journey back to Earth in 6 days. On December 11, the Orion spacecraft will plunge through the Earth's atmosphere at 40,000 km/h, a major test of the capsule and heat shield when subjected to temperatures up to 2,750 degrees Celsius. Orion will then parachute landing in the Pacific Ocean, ending the Artemis 1 mission.

If the Artemis 1 mission goes well, Artemis 2 will fly astronauts around the Moon in 2024, and Artemis 3 will carry a crew to land on the Moon's south pole a year later. From there, NASA will continue to build a sustainable base on and around the Moon, the main goal of the Artemis program.