Mary Maersk - The largest ship in the world

Maersk Line is one of the largest transportation groups in the world with huge fleets of ships making long voyages at sea. And recently, the company has continued to assert its leading position in the world by putting into operation the world's largest long-distance container shipping vessel named Mary Maersk with the ability to transport more than 17,600 TEU containers. 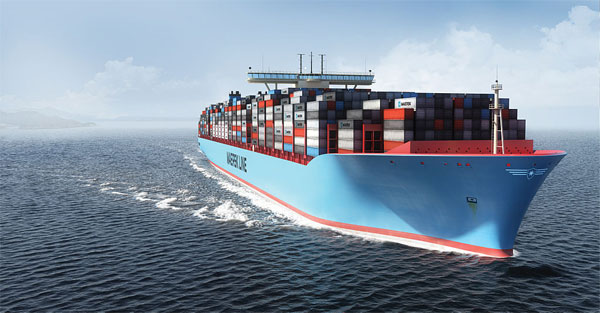 On the first voyage at sea, the Mary Maersk freighter sailed from the port of Algeciras, Spain and carried 17,603 TEU containers (a unit of measurement for a 20 foot container) and headed for the final destination of the port of Tanjung Pelepas. , Malaysia. The world record organization has put this worker as the transport ship carrying the largest number of containers so far. What is even more surprising, though, is that the figure is still not up to Mary Maersk's shipping capacity.

Built and launched at Daewoo Group's shipyard, with a length of 400 meters, Mary Maersk has a maximum capacity of 18,270 TEU containers. Moreover, this is also a ship with a fuel consumption of less than half that of its predecessors and a reduction of 50% in emissions.

The amount of Mary Maersk cargo depends on whether the port allows it to operate at full capacity or not. Carlos Arias, director of South Europe Liner Operations Cluster, said: "Algeciras Port has been able to meet all the requirements for Mary Maersk's first shipment in more than a year. available and build 4 more new cranes to serve the moving of containers on board ".

With a length of nearly 400m, this is also the longest ship that Vietnam seaport has ever received. If stacking 9,000 containers that this ship will transport, there will be a container column higher than 23,000m, which is 7 times the height of the peak of Phan Fansipan, the highest mountain in our country.

This is the largest and longest cargo ship to Vietnam.

The service will depart from the port of SP-PSA every Wednesday. Transit time is 21 days, counting from the date the container departs at the container port in Ho Chi Minh City to the date of arrival in Los Angeles.

It is one of seven trans-Pacific routes in Maersk Line's global network. Goods from Cambodia will also be transported by barge here, then transported to the United States.

Previously, in order to test the SP-PSA port to receive such super-heavy ships, on February 12, Albert Maersk was put into SP-PSA port. This is also a huge ship with a design capacity of nearly 8,300 TEU, longer than 350m.