Elon Musk reveals the identity of the father of Bitcoin?

lon Musk has caused a stir on social media after posting about a conspiracy theory related to Satoshi Nakamoto, sparking speculations about the true identity of the mysterious Bitcoin developer. 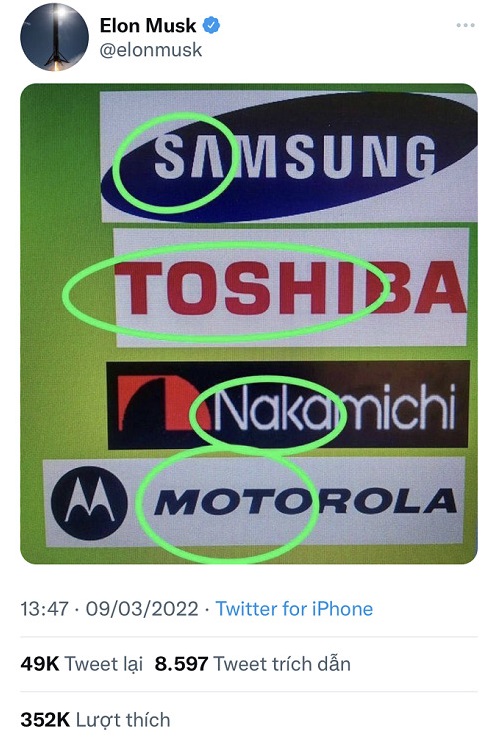 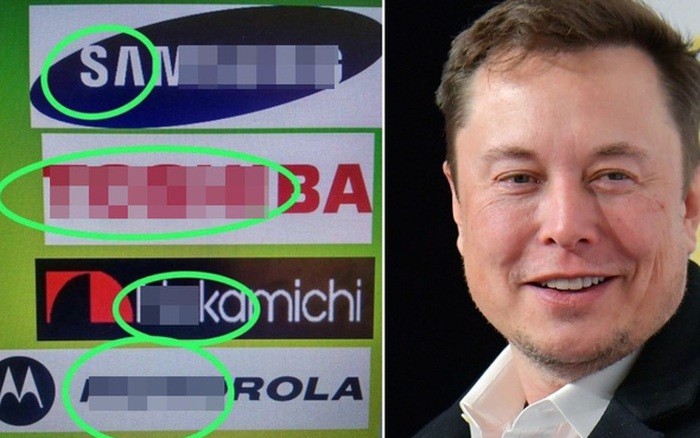 In a recent tweet, Musk shared an image suggesting that the pseudonym Satoshi Nakamoto is simply a combination of syllables from the brand names of four electronics companies: "Sa" from Samsung, "Toshi" ” from Toshiba, “Naka” from Nakamichi and “Moto” from Motorola. On Twitter, the post quickly attracted more than 350,000 likes, 49,000 retweets and more than 8,500 comments after 7 hours of posting.

After Musk's post, the keyword Satoshi Nakamoto immediately emerged on Twitter's trending list. Considering the purpose of Bitcoin was born to find new payment solutions, the fact that this digital currency was created by technology corporations is not unreasonable.

Although some have claimed to be Satoshi Nakamoto, the developer's identity has never been officially confirmed. The creator of Bitcoin is said to have started coding in 2007 and actively developed it until early 2011.

However, the theory that the four aforementioned companies are behind the identity of Satoshi Nakamoto is not new. The image that Elon Musk recently posted has been shared on Twitter for years now, while one Reddit user claimed in a 2017 thread that the conspiracy theory was posted "years ago".

Musk, a crypto advocate, has also been rumored to be Satoshi Nakamoto since 2017, due to many suspicions that the Bitcoin developer may not be Japanese. However, Musk has denied these comments. 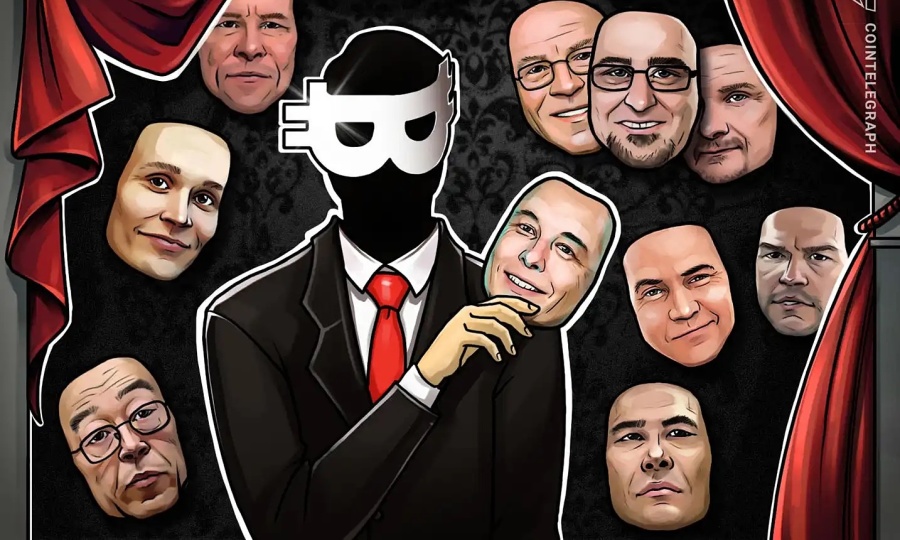 While most of the individuals suspected of being Satoshi Nakamoto deny it, Craig Wright, an Australian computer scientist, claimed his identity many years ago. In a 2016 blog post, he wrote that he is the real Satoshi Nakamoto and has evidence to back up his claims.

Some, including Musk himself, consider computer scientist Nick Szabo to be the real Satoshi Nakamoto. Prior to the last tweet, Musk had described in an episode of “The Lex Fridman Podcast” from last December that Szabo was “more in charge of the ideas behind Bitcoin than anyone else.”

Since the identity of Satoshi Nakamoto may remain an eternal mystery, it is difficult for the Internet community to stop speculating. After Musk's tweet went viral, many users continued to weigh in with their own conspiracy theories.

The photo referring to the name Satoshi Nakamoto was posted on Twitter by Elon Musk on March 9 and is spreading throughout social networks.

The identity of Satoshi Nakamoto , said to be the father of Bitcoin , remains one of the biggest mysteries of the cryptocurrency community in particular and the technology world in general. For years, the community thought that Nakamoto was an anonymous figure, but recently, billionaire Elon Musk hypothesized that the creator of Bitcoin could be an organization.

The photo Musk posted includes the names of four famous technology corporations, namely Samsung, Toshiba, Nakamichi, and Motorola. When combining the first characters of the brand, the words Satoshi Nakamoto will appear. On Twitter, the post quickly attracted more than 350,000 likes, 49,000 retweets and more than 8.5 thousand comments after 7 hours of posting. 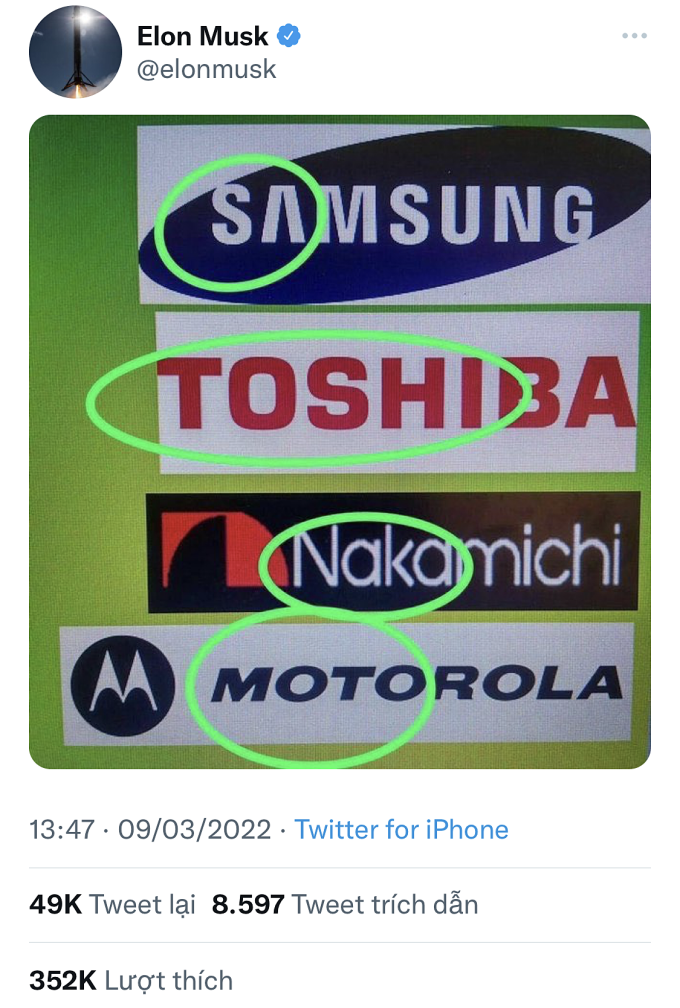 The photo alluding to the identity of the creator of Bitcoin was posted by Elon Musk on his personal Twitter on March 9.

According to News18 , after Musk's post, the keyword Satoshi Nakamoto immediately emerged on Twitter's trending list. Considering the purpose of Bitcoin was born to find new payment solutions, the fact that this digital currency was created by technology corporations is not unreasonable.

Samsung is a Korean multinational corporation. Meanwhile, Toshiba is a Japanese technology company - which is considered the home of Bitcoin. Nakamichi is a major Japanese speaker brand and has now been sold to China's Nimble Holdings. Motorola is a multinational telecommunications company that originated in the US and now belongs to Lenovo of China.

However, it is not ruled out that Elon Musk means that the creator of Bitcoin simply used the initials of the above brands to put together the nickname.

This is not the first time Musk has mentioned the identity of the father of Bitcoin. Before that in 2017, the South African-born billionaire had repeatedly taken to Twitter to deny rumors that he was Satoshi Nakamoto. Late last year, in an interview with Lex Fridman - a famous AI researcher, Musk affirmed: "I know who created Bitcoin, but definitely not me."

Bitcoin was born in 2007 and has become the most valuable cryptocurrency today. Cryptocurrencies are prized for their transparency, anonymity, and decentralization. Therefore, if the true father of Bitcoin is revealed, it is likely that the value of this coin will decrease in value.