The Greater Adria continent is about the size of Greenland that existed hundreds of millions of years ago after separating from the Gondwana supercontinent.

Research published Tuesday in the journal Gondwana Research shows that geological forces slowly pushed a large Greenland-sized continent into the south of Europe 100-120 million years ago. Earlier, this continent was half submerged underwater. But while the Greater Adria collapsed toward the Earth's mantle, the top soil layer was pushed and extruded into mountains scattered in 30 European countries today. 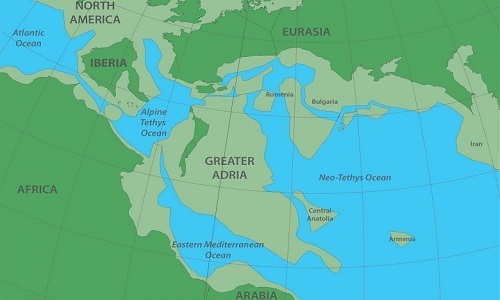 To explore the past of Greater Adria, Douwe van Hinsbergen, lead author of research at the University of Utrecht, and his colleagues took a decade of collecting geological data from countries across Europe, North Africa and Western Asia. . Natural magnets in the Earth's crust help the team track the movement of tectonic plates 240 million years.

As molten lava cools at the boundary between the two tectonic plates, it stores rocks containing magnetic minerals. The stones lie vertically in the direction of the Earth's magnetic field, allowing scientists to calculate the magnet position on the planet millions of years ago.

The team looked at magnetic stones at 2,300 ancient sites across the Mediterranean region. They then used the data to create computer simulations of the movement of the Earth's tectonic plates before, during and after the Greater Adria sank into the mantle.

At that time, Adria might look like today's Zealandia, the subcontinent below the North and South Islands. Only 7% of Zealandia is above sea level. 100 - 120 million years ago, the movement of tectonic plates on Earth pushed the Greater Adria down to the mantle with the deepest point located 1,500 km below Greece, according to van Hinsbergen.

The results of the study help to reproduce the geographical history of the world, and identify and exploit valuable minerals. Geological reconstruction also helps researchers better understand the current formation of mineral mines and metal ores.