The Integral Telescope operated by the European Space Agency (ESA) detects extremely powerful radio lightning (FRB) from a star from the name SGR 1935 + 2154. 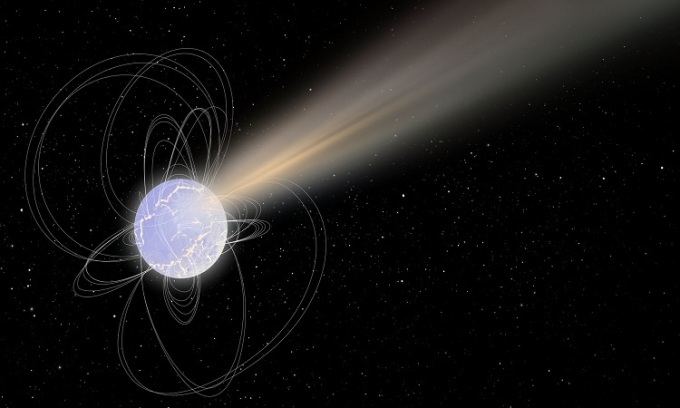 Recently, researchers discovered that stars from SGR 1935 + 2154 emit both X-ray signals and radio waves. The discovery of the ESA space telescope, a device floating at an altitude of nearly 153,000 km above Earth to track radiation in the universe, is the first observation to reveal the relationship between magnetic stars and radio waves . The results of the study were published July 27 in the Astrophysical Journal Letters.

"We detected high-energy lightning and X-ray pulses with Integral on April 28," said lead researcher Sandro Mereghetti at the Institute of Astrophysics (INAF – IASF) in Milan, Italy. "This is really an important finding, helping to reveal the source of this mysterious phenomenon."

Magnetic stars are stellar bodies with the strongest magnetic field in the universe. They are a type of neutron star, the collapsed core of giant stars with the mass of the Sun, but the size of a city. When the stars are active, they can produce extremely short, high energy radiation pulses. These pulses usually last less than a second but are billions of times brighter than the Sun.

"Integral automatically alerts observatories around the world to detect within seconds," Mereghetti said. "This allows the scientific community to act quickly and explore quite a bit more radio sources. We have never observed radio waves from stars before."

Astronomers detected an extremely bright short wave of light from the direction of SGR 1935 + 2154 through the CHIME radio telescope in Canada the same day. Integral's IBIS camera helps the team accurately pinpoint the source of the lightning, according to co-author of research Volodymyr Savchenko at the University of Geneva, Switzerland.

First discovered in 2007, radio waves are one of the biggest mysteries yet to be solved in astronomy and researchers still don't know their nature. They only lasted a few milliseconds before disappearing and rarely reappeared, confusing researchers for years.

The team's findings at ESA reinforce the hypothesis that radio waves emanate from stellar stars. The research results also demonstrate that lightning waves from objects with high magnetic properties can be observed at radio wavelengths. Researchers will continue to investigate the cause of the FRB signal in April.