A planet very close to Earth is turning into a "monster", tearing up the moon 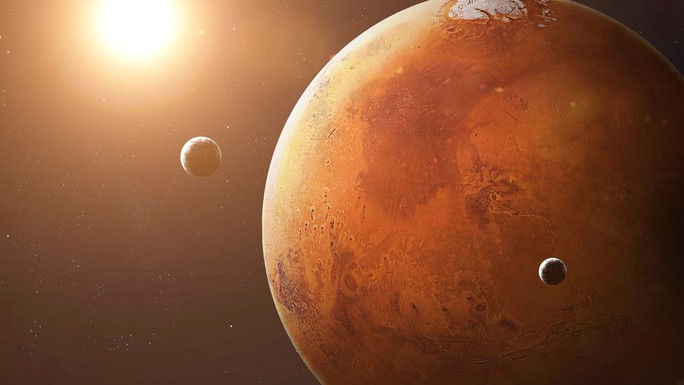 The most obvious sign are the strange parallel grooves on the surface of this 27 km diameter moon, caused by the red planet's excessive gravity.

The trenches were previously thought to be scars from the impact of an ancient asteroid, but the latest data shows that these dusty canyons are expanding.

In fact, Phobos is inherently an unlucky moon due to being trapped in a "death spiral" of the parent planet itself.

Live Science quotes the authors as explaining: Our Moon rotates in a stable orbit around the Earth, but Phobos is getting closer and closer to Mars, and even though it escaped the tear on the planet. Otherwise, sooner or later, the parent planet will pull straight into you, it is estimated that about 40 million years from now, there will be a collision.

Phobos' impact will cause Mars a giant scar, but it will certainly shatter it and be completely erased from the list of moons of the solar system.

However, scientists are inclined to the possibility of it being torn off before hitting the surface of Mars, because the closer it gets to the parent planet, the stronger the tidal force becomes than the gravity of Phobos itself, which is growing. keep it from being torn in half.

It is possible that after the breakup Phobos will create a small ring around the planet like the ring of Saturn.

The authors hope this can be demonstrated more specifically through the Mars Moon Exploration (MMX) mission that the Japan Space Agency (JAXA) will launch in 2024.